Some of my favourite plants are spring ephemerals.  They remind me of playing outside as a child, discovering magical scenes where boulders blanketed in lush green mosses rest beneath as yet unleafed oak and maple trees, and the most delicate wildflowers glow in narrow sunlight.

Erythronium 'Pagoda' in my shade garden

As young girls will do, we searched carefully for signs of elves, or other faerie folk, our imaginations running as wild as the creek in spring.  We never did catch anything other than the odd tree frog, garter snake or trout minnow, but we were enchanted by the flowers that I grew up knowing as Easter Lilies, Shooting Stars and Trilliums.

I seem to remember plucking a Trillium from the banks of the creek once, and only once. “Never pick the wildflowers, especially the Trilliums” my Mother admonished me “They won’t bloom for seven years if you pick them”.  I was horrified that I’d doomed that poor little plant to so many years of bloomless existence!

I now know that isn’t exactly true, but picking a trillium seriously injures the plant by preventing the leaf-like bracts from producing food for the next year. It will take many years for it to recover, just how many depends on the age and vigour of the plant before it was “deflowered”.  Trilliums do require seven years at a minimum from seed to flowering.

The “Easter Lilies” and “Shooting Stars” that we found in slightly drier, sunnier spots I now know as Erythronium oreganum and Dodecatheon meadia.  They thrive under similar conditions so can be found together and blooming at the same time, creating absolutely enchanting tableaux.

I think that these experiences of my childhood were the genesis of my love affair with plants and nature.  Would I still have this deep appreciation of the natural world if I had been raised in the city, my outdoor experiences in the streets and parks of suburbia?

I am trying to recapture some of that magic with a small planting of spring ephemerals under my Laburnum tree.  I planted some Trillium grandiflorum last year, and a friend gave me some pink fawn lilies (Erythronium revolutum) from her lovely wild acreage.  Both are blooming for me this year. 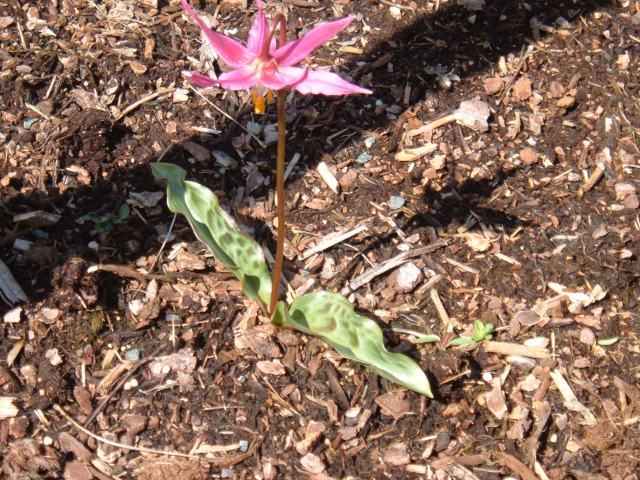 Just this spring I bought some Shooting Star (Dodecatheon meadia) from the garden centre, I’ve potted them for now, and after a little babying I’ll tuck them in there with the others.  Now I just need a big moss-covered rock or two…

I am a very opinionated, slightly obsessed gardener with decades of experience in the retail nursery industry. A lucky resident of the "Wet Coast" of British Columbia I tread a muddy path between practicality and beauty, with my veggie patch, herb garden and fruits vying for position with the beautiful trees, shrubs and flowers that I can't resist. DON'T ask me to choose between them! I believe in environmental responsibility and common sense.
View all posts by hortophile →
This entry was posted in My Favourite Plants, Shade Garden and tagged BC garden blog, Dodecatheon, Ephemeral plant, Erythronium, Laburnum, Shooting Star, Trillium, Trillium grandiflorum, Vancouver Island garden blog. Bookmark the permalink.